The ELI-ALPS facility and a consortium between fiber laser developer EKSPLA and femtosecond laser source provider Light Conversion UAB are collaborating to build a laser system called SYLOS3. The approximately €6 million laser system, for which delivery is planned for 2022, will be installed at ELI-ALPS’s headquarters in Hungary.

The system will feature more than 15 TW peak power at a repletion rate of 1 kHz and a fewer than 8-femtosecond pulse duration. SYLOS3 will operate at more than 3× higher peak power than the SYLOS2A system, which is already installed at ELI-ALPS headquarters.

“The ELI-ALPS SYLOS3 laser system is planned to generate coherent x-ray radiation through gas and surface higher-order harmonic generation, as well as electron acceleration in order to serve various experiments,” said Ádám Börzsönyi, head of ELI-ALPS’ Laser Sources Division. “One of the many applications is the generation of isolated attosecond pulses for attosecond metrology. The beamlines operated with the SYLOS laser are designed for user operation and demands high stability of operation with high up-time. These tasks will be top priority when designing and developing the SYLOS3 system.” Due to the exceptionally large extreme ultraviolet (EUV)/x-ray energy, the system additionally creates possibilities for nonlinear EUV and x-ray science, as well as 4D imaging and industrial, biological, and medical applications.

The SYLOS3 laser system will be based on Optical Parametric Chirped-Pulse Amplification (OPCPA) technology, a method that generates high-intensity radiation. OPCPA, developed at Vilnius University, delivers higher pumping efficiency — and improves on contrast and bandwidth — compared to conventional Ti:sapphire laser based femtosecond technology. These factors combine to deliver an increased degree of control over the generated radiation. 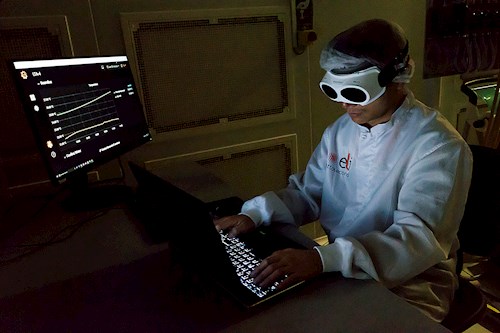