On 4th November, the University of Szeged signed a cooperation agreement with École Polytechnique University and TAE, California. The international project aims to develop a laser technology that makes it easier to dismantle nuclear waste.

At the press event, Gábor Szabó, prorector of the University of Szeged, said that the nuclear waste’s half-life of hundreds of thousands or possibly millions of years is currently a great challenge for science, although the principle of treatment has been available for decades. The solution is partitioning and transmutation, which means separating the components of nuclear waste and then converting the ones that have long half-lives by transmutation. With this method, it is possible to obtain the radiating nuclei into nuclei which decompose faster or do not radiate at all.

Why has this solution not been widely adopted so far? First of all, the current methods have little or no control over the transmutation process and, on the other hand, the generation of neutrons to initiate and sustain transmutation has so far been carried out in nuclear reactors or ion accelerators, which presents a high-cost and high-risk solution.

As part of a new international project, researchers are looking into whether the generation of neutrons to initiate transmutation can be solved by laser acceleration, which would make the original idea effectively applicable in practice. According to computer simulations, the production of neutrons of sufficient number and energy requires very short laser pulses. Therefore, laser infrastructure at the ELI-ALPS research institute in Szeged has the greatest chance of demonstrating successful experiments.

Allen Weeks, director general of the ELI Delivery Consortium, which is responsible for coordinating the work of the research centres of ELI in Hungary, the Czech Republic and Romania, will personally follow the transmutation project. As he said, proper management of nuclear waste is of high importance to all mankind, and the international cooperation project puts not only Szeged and ELI but also Hungary on the scientific map of the world. On Tuesday, the day after the press event, participants of the workshop on transmutation continued the discussion at ELI-ALPS with a roundtable session and then visited the available research infrastructure. 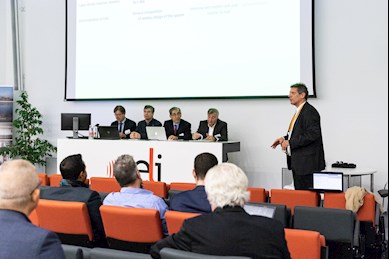