The User Meetings are a chance for the ELI ERIC facilities to introduce new research opportunities to their scientific communities. Both ELI Beamlines and ELI ALPS held hybrid User Meetings which all together gathered almost 500 participants in total, in person and online. While the facilities addressed their recent developments and scientific capacities, new collaborations and experimental plans were discussed with the dynamically expanding user network.

This year’s user meetings were marked by the recent establishment of ELI ERIC (European Research Infrastructure Consortium). The main mission of ELI ERIC is to make the ELI facilities available to the scientific community as a single international organisation, with unified governance, management and user access. Both events included an overview presentation of the current status of the ERIC by Director General Allen Weeks, in addition to a joint approach to ELI’s FAIR Scientific Data management System, presented by Senior Coordinator for Scientific Computation, Teodor Ivănoaica. Additionally, both facilities addressed their respective project status and scientific developments at the corresponding other user event. Several talks incorporated the IMPULSE project which plays a crucial role in supporting the efforts for a seamless and effective integration of the facilities. 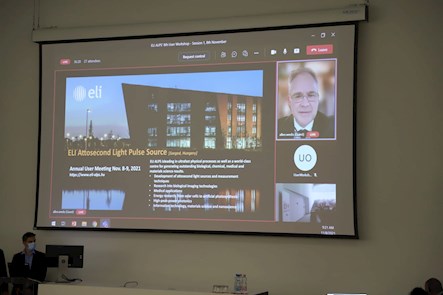 The ELI Beamlines User Conference took place on 20-21 October with the overall aim of providing updated information about the current status and offered technologies of the facility, as well as presentations of the individual experimental stations. The scientific programme was launched with a joint plenary session for all users and divided into 9 panels focused on specific research topics, such as Multidisciplinary Applications of Laser-driven Ions, Laser-Plasma Interaction in the P3 Infrastructure, Laser-Plasma Ion Sources at the ELIMAIA Beamline and Laser Wakefield Acceleration in Near Critical Density Plasmas. As an important topic, the Safety and Radiation Protection rules of ELI Beamlines were also addressed with the future users.

“These are very challenging times for the entire world around us, and we have to explore new ways to reach the scientific community,” says Daniele Margarone, Head of Department of Ion Acceleration and Applications of High Energy Particles at ELI Beamlines, Chair of the User Conference. “We appreciate that we were able to meet at least part of our user network in person again but will continue pushing the hybrid event model as it really expands our outreach.” 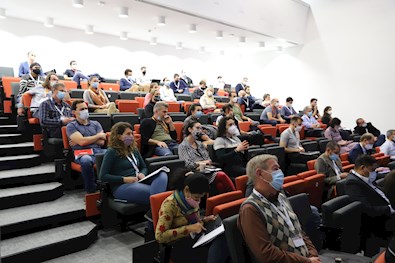 The 8th ELI ALPS User workshop was held on 8-9 November in Szeged, Hungary. Also starting off with a plenary session featuring overview presentations, the programme went on with a detailed introduction of the laser systems, secondary sources and available applications which was followed by insightful reports from the users themselves about the experiments carried out at the ELI ALPS facility. Scientists from MPG Germany (AMO Experiments with XUV Radiation, and Prospects at ELI ALPS), Technical University, Germany (NanoEsca Endstation: Recent Progress and Prospects), University of Szeged, Hungary (Recent Results on Laser Ion Acceleration from the University of Szeged NLTL Beamline at ELI ALPS), and many more, demonstrated their user experience at ALPS. The ELI ALPS User Office presented a practical guide on how to apply to user calls and gain beamtime at the facility.

“We have more and more topics and user experiments to report on every single year and we are very much looking forward to commencing the steady-state operations phase of ELI,” says Dimitris Charalambidis, Chief Scientific Advisor of ELI ALPS, Chair of the User Workshop. “It is crucial to demonstrate the exact applications and research potentials we can provide to the scientific community. We are getting closer to being the user-based infrastructure we aim to be – with the highest level of scientific excellence.”

With the ELI ERIC established, a new phase has begun with more collaborations between the two ELI ERIC facilities resulting in joint approaches to facility access and user calls, among other aspects. A first joint user call is planned for 2022.