Science Challenge Finals: We Have a Winner!

ELI Beamlines and HiLASE Centre launched a competition for secondary school students in late October to participate in the Science Challenge. Teams made up of three students had the opportunity to gain deeper knowledge in the areas of programming, optics, physics and most importantly teamwork. After submitting their projects, the top three teams were invited to compete in the final challenge on 18-19 February at the ELI Beamlines laser research facilities in Dolní Břežany. The activity, supported by the IMPULSE project, demonstrates to younger audiences that laser science is interesting and fun, as well as an approachable career path for their future.

Code, innovate and tame the laser beam – was the slogan of the first announcement of the Science Challenge organised by the ELI Beamlines facility and HiLASE Centre. Registration was open for high school students aged 15-19 and a teacher to overlook the team of three young scientists. By the end of the application period, ten teams from all across the Czech Republic entered the competition. 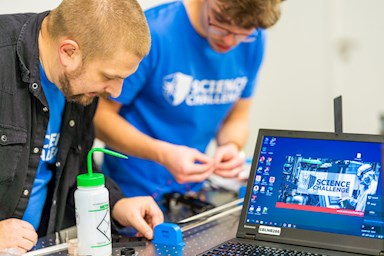 In the first online round of the challenge, the competing teams had to write a code to control a laser system according to the given parameters, and were later given the opportunity to test the programming remotely in the research centres, obtain important data and process them. Mentors from both ELI Beamlines and HiLASE were available to help the teams overcome the challenges.

“The jury – consisting of laser physicists and electronics experts – then evaluated the submitted projects not only considering the coding,” said Michal Vyvlečka, Organiser of the Science Challenge. “They also looked at the user environment, the processing of the targeted data, and the presentation of the solution used. An important aspect was creativity and the innovation-factor of the submitted works. The decision to name a winning team was not easy at all, especially with so many great ideas and promising talents in the run.” 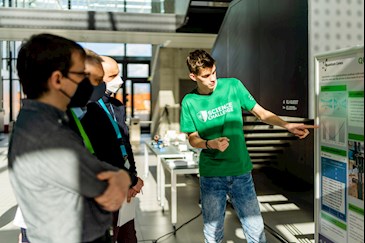 Despite the strong competition, the jury selected the top 3 teams – Quantum Limes, codes_of_anarchy and Nafta-Anime – of the Science Challenge who were invited to the finals at ELI Beamlines and HiLASE on 18-19 February 2022. In this final round, the focus fell on the actual construction of laser set-up(s): students had to assemble hardware and lenses in addition to the writing the code. They spent two days in the labs where they had optical tables with all the necessary equipment and 3D prints of custom designs prepared by themselves during the first online round. In the end, Team Nafta-Anime came out as the winner as they effectively organised and divided the work and demonstrated a very elaborate, and above all, functional set-up.

“This competition is all about science, teamwork, efforts, and motivation – and that’s what drives us, scientists, day by day,” adds Michal Vyvlečka. “It really is an unmatched opportunity, and next time, we would like to expand the scope, and make this an international challenge for all youngsters in Europe to experience,” concludes Michael Vích, PR manager of ELI Beamlines.

The organisers intend to keep in contact with all the participants of the competition to support them in the next steps of their scientific career – possibly in form of an internship at one of the ELI facilities. More information is available at the official website of the Science Challenge.