Since the discovery of X-rays by Roentgen, radiography of human tissue or body has followed a rapid evolution thanks to outstanding possibilities offered for the diagnosis of a large number of diseases. Currently, two important issues remain on the one hand the strong radiation dose received by the patient during the process of obtaining a high quality image and on the other hand the poor spatial resolution of about 1 cm due to the conventional source size. In conventional X-ray imaging, contrast is obtained through the differences in the absorption cross section of the constituents of the object. The technique yields excellent results where highly absorbing structures, e.g., bones, are embedded in a matrix of relatively weakly absorbing material, e.g., the surrounding tissue of the human body. However, in those cases where different forms of tissue with similar absorption cross-sections are under investigation (e.g., mammography or angiography), the x-ray absorption contrast is relatively poor. Consequently, differentiating pathologic from non-pathologic tissue from an absorption radiograph obtained with a current hospital-based x-ray system still remains practically impossible for many tissue compositions.

To overcome these limitations, several methods to generate radiographic contrast from the phase shift of x-rays passing through the sample have been investigated in recent years. Impressive results of phase contrast imaging for medical diagnostics with brilliant, higher energy x-ray beams, where the dose can be reduced by a factor of 50 and the resolution can be improved by a factor of 200 compared to conventional X-ray absorption imaging, have been demonstrated at large synchrotrons like ESRF [1,2]. Such techniques allow detecting breast tumours at a much earlier stage (1mm diameter compared to 1cm) where spreading by metastasis is much reduced and tumour treatment without chemotherapy is an important perspective. For the diagnostics of cartilage and osteoarthritis therapy the high resolution is decisive [3,4].Phase-contrast imaging is also a powerful tool to reveal the structures inside soft tissues without the use of contrast agent because this technique has several orders of magnitude higher sensitivity than that of conventional absorption method [5]. Indeed, Phase contrast x-ray computer tomography (PCCT) indicates the distribution of the refractive index and has therefore the potential to reveal the structures inside soft tissues. PCCT demonstrated various inner structures of rabbit [6] or human cancer [7]. 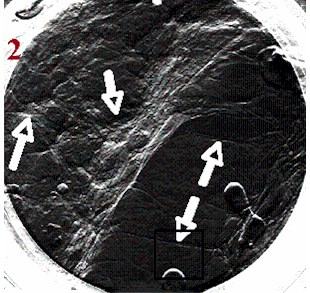 Fig. 2: Phase-contrast imaging recorded with 25 keV photons of the same human breast tissue as used for fig. 1. The quality of the image is dramatically enhanced with better contrast and higher resolution of small elements. (Courtesy A. Bravin, ESRF) 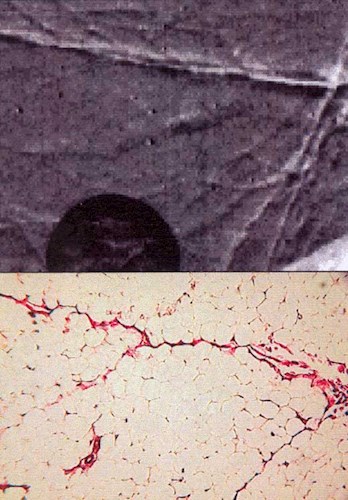 A German ELI partner (LMU) has recently started at ESRF the Long Term Proposal MD-286 “A clinical-oriented Approach towards Diffraction Enhanced Imaging of Breast and Cartilage Tissues” to understand the requirements on the X-ray beams and their usage in clinics much better. A prerequisite for methods aiming towards clinical x-ray applications is that the x-ray generators fits into hospitals with reasonable cost, which is not the case of highly brilliant X-rays sources from 3rd generation synchrotron.
Here laser-based electron beams followed by X-FEL’s hold promise to get compact table-top designs, which fit into hospitals [8]. ELI’s intension to built high power kHz laser systems will allow developing such stable table-top X-FEL systems. Typical X-ray beam requirements are: energy from 30 to 60 keV, bandwidth from 0.5 to 1 keV, 107 photons/mm2 and 10 seconds per picture.

The development of these brilliant laser-driven X-ray and particle beams fro medicine can lead to an important large-scale impact on public health care and national economy involving large European companies like Siemens Medical.

Dynamic generated within the ELI medical community by the researches on phase-contrast imaging will serve other groups working on plasma physics, material and surface sciences…